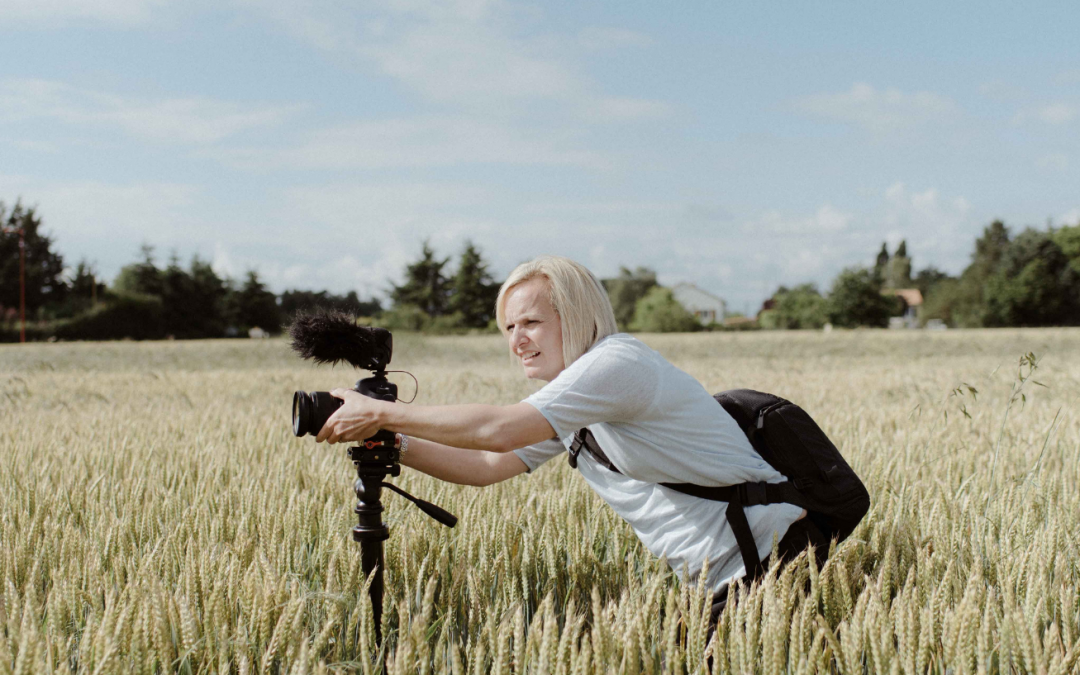 I am passionate about helping female filmmakers be the best they can be and equipping them with the skills, experience and know-how to succeed.

So, I was delighted to be invited to contribute to an article in the renowned and award-winning Rangefinder Magazine all about ‘leveling the playing field as a female wedding filmmaker’.

I run a successful wedding film business, Story Of Your Day.

Rangefinder wanted to know how I got into the industry, what challenges I have faced, and what I am doing to ensure that the future of wedding filmmaking is more gender-equal than years gone by.

I was the only female videographer from Europe to be included in the Rangerfinder article, alongside two wonderful others from the United States – Meg Simone and Rachael Curry.

During my interviews with Rangefinder, I learnt some fascinating facts. Did you know that in Hollywood, just four per cent of directors, three per cent of cinematographers and 18 per cent of producers are female?

And, while I know from my experience of filmmaking in the UK wedding industry that it is an area largely populated by men, it was interesting to hear that Meg and Rachael have similar experiences in the US, too.

Similarly, while I’ve received quite a bit of criticism from male videographers for hosting my female-only videography training courses, or for running a private Female Film Creatives Facebook group – it was reassuring that both Meg and Rachael see the need for such opportunities too.

Rachael has ‘found refuge in online groups dedicated specifically to female filmmakers as ‘she can ask questions that she knows wouldn’t go over well with a male audience’.

Meg runs a workshop for New England-based wedding professionals that is popular with female creatives for being a ‘super safe place where people feel welcome and loved and can share and learn together.

Natascha from Belle and Sass attended my first ever Evolve Videography Retreat and felt it was the perfect environment for her to learn. Watch Natascha as she shares her experience in the film below.

The problem is, I think, is that some men in the industry appear to feel threatened by women-only groups and workshops.

Some jump to conclusions that the group or workshops are about being anti-men and say I am at odds with the age of diversity and inclusivity and running the risk of reverse discrimination.

I recently posted in one videography group about Female Film Creatives and, although almost all of the comments were positive, some of the negative reactions shocked me.

Some suggested that having male or female only groups is ‘segregation’ and that having such a group was ‘reversing time’ and the progress that has been made in equality. All comments are of course welcome but these are just a couple I can actually mention in this article as some were very demeaning, critical and even degrading.

In fairness, I have had male and female videographers respond and stand up for the idea …

One commented that ‘one side of the aisle isn’t listening and learning from the original reason that a group like this even exists’. Another said that my group is ‘an amazing idea’ and that some of the comments left ‘little to be desired’.

Recently, a male videographer friend of mine wrote to me saying that he loved my idea about female-only training and that in a male-dominated industry women need a platform to feel 100 per cent comfortable. He went on to add that: “You women are proving to be better filmmakers than us guys!”

And, there is also a view that the future is ‘getting rid of the rubbish’ and letting true talent shine. It’s definitely true to say that the way should be made clear for a talented pool of women to come forward.

So, why do I focus on empowering women?

I love this quote made by one of the filmmakers in my group, Donna Reid, recently.

It’s perfectly fitting for the group and for my training. For many up and coming female film creatives, starting out in a male-dominated industry can be a scary and intimidating experience.

I wanted to offer a place to relax, for women to say or ask what they want unfiltered. While our conversations range from the technical and creative side of wedding videography, such as filming styles, advice on cameras, lenses and audio equipment, there is the opportunity to exchange views on many other subjects, like finding the right clothes and footwear for filming 15 hours at a wedding.

Indeed Rachael touches on this aspect in Rangefinder. She feels she can “ask questions that she knows wouldn’t go over well with a male audience… “I can say stuff like, ‘How do you carry your stuff? It hurts my body, I can’t push myself or else I get injured’.”

I am keen to develop all talent, it must be said. My one to one videography training is available to men, and I also offer team workshops so men are by no means uninvited from the party.

I feel super proud to be in the Rangefinder article and to feel my work with an amazingly talented group of female creatives is recognised and appreciated. I am now even more determined to inspire and empower more women to excel.